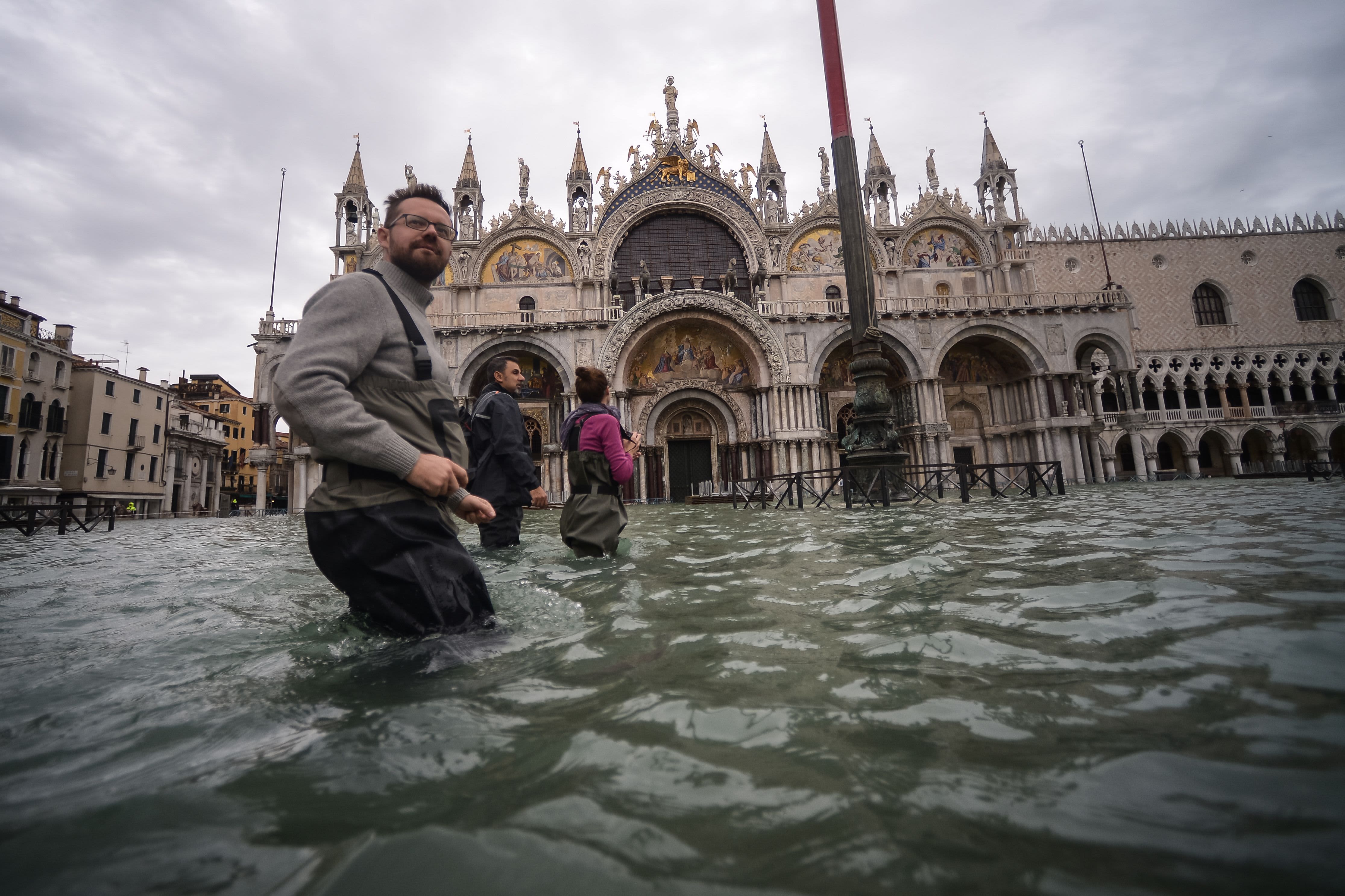 A general view shows people walking across the flooded St. Mark’s Square, by St. Mark’s Basilica on November 15, 2019 in Venice, two days after the city suffered its highest tide in 50 years.

For Venetians, water is a way of life. It surrounds the city, ebbing and flowing, and at certain times of the year — usually in the fall — the tide swells, spilling water into the narrow streets and swamping the grand piazzas.

But Alberto Canestrelli, who was born and raised in Venice and spent two years working on flood forecasts for it, said the intense flooding this week in the lagoon city was unlike anything he has seen in his life.

“I’m 39 years old and I’ve never seen this,” said Canestrelli, who works as an assistant professor of environmental engineering at the University of Florida. “I’ve never seen boats destroyed or gondolas stranded on top of the bridge. That was shocking. These things don’t usually happen.”

He’s not the only native Venetian working in climate science who has watched the past week’s events with a mixture of personal pain and professional horror.

With worldwide attention focusing on photos of people trudging through thigh-deep water and gondolas adrift on city streets, carried there by the tide, scientists — particularly those who call Venice home — say what’s happening to the Italian outpost should be a cautionary tale for coastal cities around the world.

“Venice is like a canary in a coal mine,” said Sergio Fagherazzi, a coastal geomorphologist at Boston University, who also grew up in the northern Italian city. “It’s possible to apply the same concept in the U.S., and it’s very relevant now for any low-lying area.”

The most dangerous part of California’s wildfires: Pollution
Tree-planting campaigns are popular, but do they make a difference?
How to cut down on holiday waste and help the planet

As climate change causes sea levels in Venice — and across the planet — to steadily inch higher, scientists say catastrophic floods could become more severe and more frequent, with some parts of the city being inundated on a daily basis.

This week’s flooding stemmed from unusually high tides exacerbated by the gravitational effects of the full moon and strong, 62-mph winds that whipped up a higher-than-expected storm surge. On Tuesday, water levels reached 6 feet 2 inches — the highest in 53 years and just 2 inches shy of matching the record of 6 feet 4 inches that was set in November 1966.

The government declared a state of emergency Wednesday, and water levels remained high for the rest of the week.

Some flooding is common during the so-called astronomical high tide, when Earth, the moon and the sun are aligned and the gravitational attraction among these celestial bodies generate strong tidal forces. But rising sea levels are making catastrophic events more regular.

“During the normal tides, only a few parts of Venice go underwater,” Fagherazzi said. “Now, because sea levels are higher and higher, what before was an event every 100 years now becomes an event every 20 years.”

Since the record-setting 1966 flood, sea levels in Venice have risen more than 5 inches. And according to a recent report from the United Nations’ Intergovernmental Panel for Climate Change, sea levels around the world could rise by 1 meter, or more than 3 feet, by the end of the century.

“That means that the sea levels will be so high that the lagoon will flood the city regularly,” said Marco Marani, a professor of civil, environmental and architectural engineering at the University of Padua in Italy. “What we refer to as nuisance tides will be more than just a nuisance. It will be potentially twice daily. Flooding two times a day is not livable.”

But Venice is also grappling with what scientists refer to as subsidence. Essentially, the city is slowly sinking.

Beginning in the 1950s, Italy underwent a period of rapid industrial development, during which the government pumped enormous amounts of groundwater from beneath the lagoon city.

“They were not very sensitive to environmental problems, and they extracted a lot of freshwater from the aquifers,” said Sonia Silvestri, a senior researcher at the University of Bologna who has done extensive work on sea level rise in Venice. “When you pump water out, you let the sediment compact. So what happens is the land and the islands will lose elevation.”

Groundwater pumping has stopped, but the city is still sinking at a rate of about 2 millimeters a year — a relatively small effect, but one that has important consequences as sea levels continue to rise.

But Venice is not alone in confronting how to hold back the encroaching sea.

“You have to consider that most of the global population lives within 250 kilometers of the coast, so this is something that is relevant not just for a place like Venice,” Marani said. “With so many people living near the coast, this is a much wider issue. This is by no means a local problem.”

Silvestri said she hopes the shocking images of a waterlogged Venice that have circulated on social media this week will galvanize people and governments into taking action.

“All the images and movies that were posted were very scary,” she said. “In 1966, it was difficult to follow what happened, but this time, social media was a very powerful way to spread information around.”

In Venice, where residents are used to dealing with periodic flooding, this time feels different, according to Fagherazzi, whose brother owns a store in the city that was inundated with water.

“For the first time, I saw them scared,” he said of the attitude of local residents. “Before, they would be upset or annoyed to lose merchandise or have damage to their house, but this time I saw more and more people were scared for their lives.”

This week’s events, which will likely cost hundreds of millions of euros in damages, also show that climate change is not a future problem, but one that is impacting people’s lives now, said Georg Umgiesser, a senior scientist at the Italian National Research Council’s Institute of Marine Sciences in Venice.

“People have no feelings about sea level rise, but they can see what happens during a storm surge,” Umgiesser said. “People may not believe you if you say that sea levels are rising, but they can see that their house has flooded three times this year already.”

Macy’s reports first-quarter loss but does not expect ‘another full shutdown’
Stock futures rise slightly, headed for gains to finish out June
How Congress Is Addressing Elder Justice In America
Bobby Bonilla ‘took the Mets to the woodshed’ with his lucrative 25-year deal
Stocks Are Rallying Too Much On Vaccine News, Says This Market Expert