It’s no secret that machines are taking up a bigger and bigger share of investing, but the extent of their influence is approaching shocking proportions. It is as high as 80%, according to one major investing firm.

Passive investments such as index funds and exchange-traded funds control about 60% of the equity assets, while quantitative funds, those which rely on trend-following models instead of fundamental research from humans, now account for 20% of the market share, according to estimates from J.P. Morgan.

This means so much of stock trading is now in the hands of automated buyers and sellers that the market is increasingly sensitive to headlines and more prone to sharp price swings, many notable investors believe.

Omega Advisors founder Leon Cooperman previously said computer trading is creating a  “Wild West” with the markets, calling for an investigation by the Securities and Exchange Commission.

DoubleLine Capital CEO Jeffrey Gundlach has taken a shot at passive investing, saying it is causing widespread problems in global stock markets. He called it a “herding behavior.”

While algorithmic models have gained popularity on Wall Street, low-cost passive vehicles keep raking in assets from Main Street. Passive funds have attracted $39 billion of inflows so far this year, whereas active funds lost a whopping $90 billion in 2019, according to J.P. Morgan. 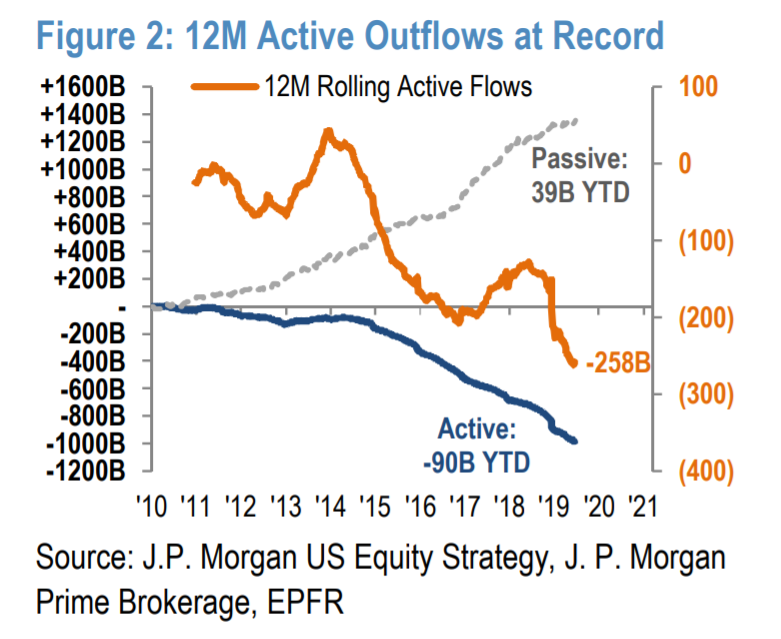 “The pace of outflows from Active is at a cycle high while the pace of passive equity inflows has bottomed and [is] beginning to reaccelerate,” Dubravko Lakos-Bujas, J.P. Morgan’s chief U.S. equity strategist, said in a note on Friday.

Op-Ed: It’s never too early to save for that emergency
US malls ‘will be hit hard’ if coronavirus worsens, study finds
Dow futures bounce as market attempts to recover from worst drop in 2 years
Free trading fuels rampant speculation in stocks like Tesla and Virgin Galactic
Mylan warns of possible drug shortages, financial hit due to coronavirus