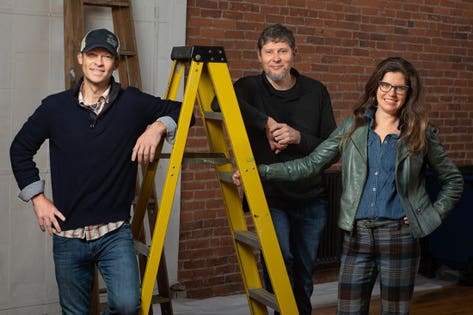 Shane Brewer is a 29-year-old branch manager for Bangor Savings Bank in Maine who is about to build his dream home with his wife using a startup company called Profile Homes.

It will be the Brewers’ third home and, they hope, their last.

But for Profile Homes founder Matt Silva, 40, the Brewers’ home will mark the beginning of what he hopes is a new era in custom homebuilding.

“We started in from the ground up,” Silva said. “What would the process look like from start to finish using the technology we have today, both in the building and the preparation process?”

What Silva and his partners came up with is an online homebuying process that’s similar to building the car you want online, only for homes.

“I want people to go in and literally tour our homes like they can an existing property,” Silva said. “Walk in and see the home, just like you could go to Audi.com, change the color and your tire packages and know how you’re affecting the cost. I want people to do that with our homes.”

To achieve his vision, Silva enlisted the help of architect Jen Ramsey and 3D animator Stefan Vittori, who owns Tangram 3DS in Kittery, Maine. Profile Homes is based in Portsmouth, New Hampshire.

“Stefan does international work throughout the world, doing virtual reality from skyscrapers built in Dubai to superyachts to affordable metro-constructed homes,” Silva said. “I came to him with my idea. I said no homebuilder of my size is coming to a company like yours but if there’s opportunity for a partnership we could turn this industry on its head. Stefan could see it.”

The Brewers’ first home was a typical small ranch in York, Maine, purchased under a first time homebuyer’s program.

“The market’s been pretty good,” Brewer said. “We were able to build up some equity and made a little profit.”

That profit went into Brewer’s current home in York, which is now under contract.

“The market’s still pretty good,” Brewer said. “We were fortunate to get what we wanted out of this house and roll that into building a new home, our forever home.”

“A net zero home means the home produces as much energy as it uses on an annual basis,” Silva said.

Profile Homes are configured to generate more solar power than they use in the summer, spring and fall, which results in energy credits from the power company. In the winter, when the house is using more power than it generates, homeowners fall back on those credits to cover their utility bills.

Net zero used to be out of reach for the common home, Silva says, but no longer, thanks to dropping prices for solar systems and energy efficient technology like LED lighting.

“The average cost of solar systems has gone down dramatically,” Silva said. “Ten years ago LED lighting was a hard number to look at. Now the cost is probably 20 percent of what you paid then. And the way I build homes the utility company will give me those light bulbs.”

That brings us to another unique aspect of Profile Homes — prefabrication. But don’t think of trailer parks.

Silva uses what are called structurally insulated panels, or SIPs. They are made from plywood sandwiching a core of polyurethane foam, achieving a very high insulation value. They’re also very efficient in terms of timeline.

“Any house panel can be produced quickly,” Silva said. “I give my panel manufacturer the design and all windows and doors are cut out.”

Silva says he can frame a house in a week, and build an entire house in 20 weeks with preselected packages for everything from flooring to appliances. Silva has forged alliances with national companies and manufacturers of cabinetry, windows, siding, plumbing and electrical fixtures.

“I can build throughout New England with this system,” Silva said. “It allows me to control labor and material costs. It doesn’t matter if it’s metro Boston or Burlington, Vermont, my costs are relatively close because on the manufacturers’ side I have fixed costs. I worked it all out.”

Shane Brewer is putting an offer on eight acres in York where he and his wife hope to build their Profile Home. They picked the 1,890-square-foot Barn Conversion model with three bedrooms and two and a half baths, which will cost them about $430,000, including the land, if their offer is accepted.

“In talking to friends and family going into this process some people think you’re crazy,” Brewer said. “People’s feelings around building in general is that it’s a headache. We don’t feel that way with Matt.”

For his part, Silva is reminded that as forward-thinking and high-tech as the modular approach of Profile Homes is, it’s actually nothing new.

“While I love modular and I think it’s underutilized, it dates back to the late 1800s,” Silva said. “You could order a home from Sears. It would show up by train. That’s how old modular is.”